Nursing Home COVID-19 Vaccine Mandates Protect The Most Vulnerable, But Pose a Hidden Threat to Residents 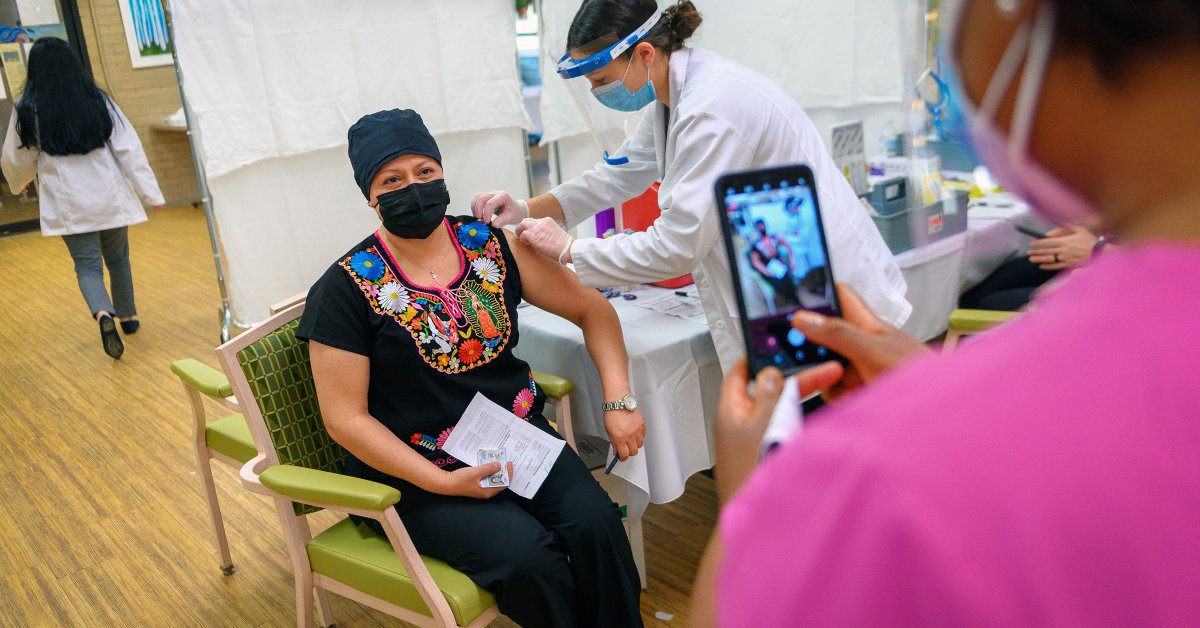 Some two weeks before U.S. President Joe Biden announced on Aug. 18 that nursing homes must require their staff to get vaccinated or risk losing their Medicare and Medicaid funding, Genesis HealthCare, which manages about 250 facilities nationwide that offer long-term care and other services, had said its workers would need to be vaccinated. “The growing spread of the Delta variant makes clear that we need to increase our vaccination rates substantially to better protect our patients, residents and employees,” read an Aug. 2 memo to employees, noting that 65% of staffers were vaccinated at that point; employees had until Aug. 23 to get their shots.
[time-brightcove not-tgx=”true”]

In the memo, Dr. Richard Feifer, the company’s chief medical officer, said that while voluntary vaccination of staff was appropriate after the vaccines were first made available, “the pandemic is different now.”

With the U.S. in the grips of a fourth wave of COVID-19 fueled by the more transmissible Delta variant, many nursing home companies and other health care providers have, like Genesis, announced that staffers must either get vaccinated or agree to regular testing, or be fired or removed from schedules. Biden’s announcement means that other nursing homes will likely follow suit, as the rule is “effectively a mandate” given the industry’s dependence on Medicaid and Medicare funding, says Dr. David Grabowski, a professor of health care policy at Harvard Medical School.

What’s less clear, however, is how many staffers will actually choose vaccination over quitting their jobs. Many will have to make this decision: nine months into the U.S. inoculation campaign, about 39% of U.S. nursing home staffers remain unvaccinated, according to the U.S. Centers for Disease Control and Prevention. In interviews with TIME, unvaccinated nursing home workers offered a litany of reasons for their decision, including health concerns and skepticism regarding how quickly the vaccines were made available. Many also shared a sense that their employers have not done enough to keep them physically and mentally safe, and requiring vaccination is a step too far. For some, it’s reason enough to quit. If enough leave, it could exacerbate the industry’s pandemic-era staffing crisis—94% of nursing homes reported a staffing shortage over the last month, according to a American Health Care Association and the National Center for Assisted Living survey of 616 nursing facilities released June 23, and low staffing levels are tied to worse health outcomes and quality of life for residents.

Among those leaving is Ashley Lanctot, a 25-year-old licensed nursing assistant (LNA) at the Genesis-operated Wolfeboro Bay Center in Wolfeboro, N.H. She and other current and former Wolfeboro Bay employees told TIME that the facility has been frequently understaffed, making it impossible to give residents adequate care. At times, Lanctot says, two LNAs would be assigned to 40 patients. If such staffing levels were maintained for an entire 24-hour day, LNAs would only have about 1.2 hours per patient; in a 2013 report prepared for the U.S. Centers for Medicare and Medicaid (CMS), on average, the lowest-rated facilities offered about 2.36 hours of aides’ time per resident a day, while the highest rated facilities offered 2.55. (In a statement, a spokesperson for Genesis said, “while staffing is certainly a challenge throughout the industry, Wolfeboro Bay Center’s ‘Hours per Patient Day’ are well above the state average.”)

Wolfeboro Bay employees say they were forced to cut corners; patients had to go without proper bathing or opportunities to socialize, and would sometimes be left to languish in bed. “You couldn’t give showers,” says Lanctot. “You couldn’t get totally dependent people out of bed using the mechanical lift…I ended up becoming very depressed, knowing that I felt like I was neglecting these people.” Other workers say the facility continued to take in new patients even as the staff struggled to care for those already admitted. “That’s not fair to the person coming in,” says Joeline Barg, a registered nurse still working at Wolfeboro Bay. “And that is not fair to the people living there. Because it takes away from both sides.” Feifer says it is a general rule at Genesis facilities to only admit patients “when they are assured to have the necessary and adequate staffing to care for them.” A spokesperson said that admissions at the Center were put on hold following the vaccine requirement announcement, and that some modifications to residents’ care were necessary to keep patients safe, based on CMS guidelines; this included a restriction on taking residents to shower rooms. That said, the spokesperson noted, these modifications played a role in the fact that no staff members or residents at Wolfeboro Bay have been diagnosed with COVID-19 throughout the course of the pandemic.

During the pandemic, Lanctot was diagnosed with hypertension from stress, and was put on bed rest for three weeks, she says. While other current and former Genesis employees say they probably would not have gotten vaccinated either way, Lanctot says that, while she has some reservations about the COVID-19 shot, she probably would have gotten vaccinated in order to keep her job if she felt that she was being treated with respect. “If you’re at a place of work, and you feel appreciated and respected, and feel like people care about you and your well being, that initiates someone to want to stay at work,” says Lanctot. “This place did not do that for me.”

It’s too early to know how many workers will follow Lanctot’s example. So far, only a small number of employees seem to be leaving their jobs; one study published as a pre-proof in the Journal of the American Medical Directors Association in July found that, at one nursing home that implemented a mandate, just 18 of its nearly 250 staff members quit, a churn rate of about 7%.

All this raises the question: is it better for nursing homes to have a small handful of unvaccinated staffers, or to suffer a staffing crisis? Grabowski, for one, says the former is the lesser of two evils. “We’re sort of on the edge right now, in terms of staffing nationally,” he says. Low staffing levels are tied to worse treatment for residents, such as the overprescription of antipsychotic drugs, and increase the risk of injuries. One study published last August found an association between understaffing and COVID-19 cases, and an Associated Press report published in November found that besides COVID-19 deaths, 40,000 more people than usual died in U.S. nursing homes last year, deaths it largely attributed to neglect and isolation.

Yet there’s no denying the deepening viral crisis in the U.S., and nursing home residents, who account for nearly a quarter of total U.S. deaths due to COVID-19 so far, are particularly vulnerable. While the coronavirus vaccines reduce the risk of hospitalization by as much as 94% among people over 65, older people sometimes have a weaker response to vaccination, and emerging data suggest vaccinated people’s immunity wanes over time (hence the current consideration of booster shots). There’s a decent argument, then, that if vaccine mandates cause some unvaccinated nursing home workers to leave, it could be a blessing for residents, who would likely be safer if all of those around them are vaccinated, especially as staff members are a link between long-term care facilities and the surrounding communities. “Understaffing may make the facility dirtier, and it may make the residents wait longer for their meals. Un-vaccination makes them dead.” says Arthur Caplan, a professor of bioethics at New York University School of Medicine.

How to fix nursing homes

If faced with mandate-triggered staff shortages, nursing home operators could theoretically raise wages to attract new workers, as many companies in other industries have done amid the recent labor crunch. However, some say that low Medicare and Medicaid reimbursements—meaning, the payments they receive from the federal government to provide services—make it difficult to raise wages, and the pandemic has taken a major financial toll on nursing home operations. In a June 29 survey from the American Health Care Association and the National Center for Assisted Living, about half of U.S. nursing homes and assisted-living facilities say they’re currently operating at a loss, and only a quarter are confident that they could stay in business for another year or longer. Yet some say higher wages are possible. “It’s primarily not so much a shortage of workers, but a failure to pay them adequately,” says Charlene Harrington, professor emeritus at the UCSF School of Nursing. “It’s a chronic problem, because most nursing homes are for-profit, and they’re trying to make money by keeping the wages and the benefits low.”

A potentially tougher problem to fix may be the culture within nursing homes. Staff members tend to come from vulnerable demographics; nine out of ten are women, a fifth are immigrants, and a majority are people of color. Additionally, nursing homes are often very difficult places to work; experts say that nursing homes tend to be hierarchical, and aides are typically undervalued. In the end, this leads to mistrust of the leadership among employees. Ongoing exploitation leads to a “culture of fear” at many facilities, including fear of reporting bad working conditions, says Jill Harrison, an assistant professor at Brown University School of Public Health.

All the same, some experts doubt that vaccine mandates will lead to nursing home staffing shortages. Harrington says that many nursing home aides who quit, in particular, are likely to seek employment at another nursing facility. And if all or most of the major nursing home chains issue vaccine mandates to keep receiving federal funds, there won’t be many places workers can go that wouldn’t require they get their COVID-19 shots.

It’s not a perfect analogy, given the unique circumstances of the current pandemic, but past research on flu vaccine mandates has found most health care workers chose to be vaccinated rather than quit. For example, a 2013 study published in the American Journal of Infection Control found that less than 1% of staff members sought an exemption or quit after Loyola University mandated all health care workers get vaccinated, and coverage rose from 65% to 99%.

Indeed, some nursing home workers have welcomed mandates as means to protect both themselves and their residents during a particularly harrowing time—as a July 2020 analysis published in the Washington Post showed, nursing home work was one of the most dangerous jobs in the U.S. 2020, with double the fatality rate of famously dangerous jobs like logging, roofing and construction, according to Bureau of Labor Statistics data.

Jenna Szymanski, a licensed practical nurse at the Good Samaritan Society–Luther Manor facility in Sioux Falls, S.D., says her reaction to the vaccine mandate was “hell yes.” To Szymanski, anyone who works at a nursing home facility has a responsibility to get vaccinated. Vaccination also makes her work feel safer, especially because she’s immunocompromised and a diabetic.

“I spend my entire shift protecting [the residents], helping them trying to heal what’s wrong. [Vaccination] just seemed like the next step to complete my duty as a nurse,” said Szymanski. “Nobody forced you into nursing … by taking that position, you are accepting all of the responsibilities, the priorities, everything that comes with it. And this is a new day and age, it’s 2021. This is now what is required.”